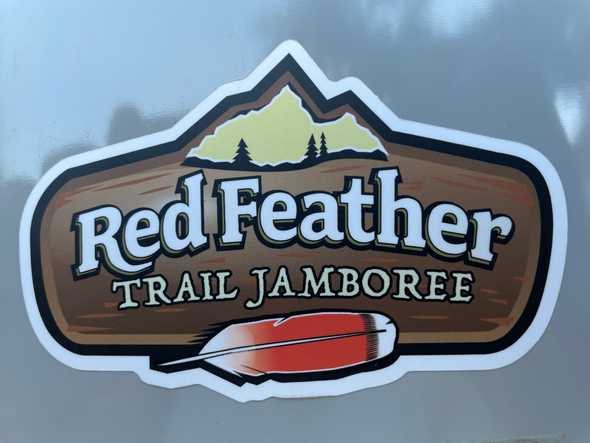 I moved to Fort Collins in May of this year. Running in the mountains, while not the only reason for the move, was definitely a primary motivator. After taking 4 months off that began with an injury in early February it was time to get back at it.

My training since moving to CO has been consistantly minimal. On average I've run about 13 miles a week. I've done some cross training with family hikes, mountain biking, and just tooling around town on an old fixed gear. In short - it's been ok. Enough to get to the finish line but not enough to actually race or expect any sort of spectactular day.

The start line near Red Feather Lakes is about an hour from my house. I could have left the morning of but I've been itching to try out my camper shell on the truck so instead I packed up the day before and headed out after work.

I'm still getting used to how beautiful it is out here. Maybe 20 minutes or so across and out of town and suddenly I'm surrounded by huge skies, vaulted ridges, and a sneaking suspicion I took a wrong turn and ended up in Wyoming.

I made it to the Scout Ranch shortly before sunset. The volunteer at the gate welcomed me to the Jamboree and gave me quick directions to mess hall for packet pickup.

The dirt road up to the mess hall is steep - I don't think I would have made it in the Prius. Thankful to have the truck so I didn't have to worry about getting stuck. That said, when it came to parking, definitely missed the Prius. I got it done but it wasn't pretty.

Packet pickup was far easier than parking a big dumb truck on a narrow dirt road. I received my bib and race swag without much of a wait and was quickly on my way.

There is a small parking lot at the start line and there were few other runners already parked and settling in for the night. I set up a little nest in the bed of the truck and slept easy until around 5am when the things started to get busy. A line of early arrivals soon appeared as they queued up to enter the proper parking lot. I followed suit to avoid the start line ruckus. Time for some truck coffee, breakfast, and a relaxed wait until race start at 8am. 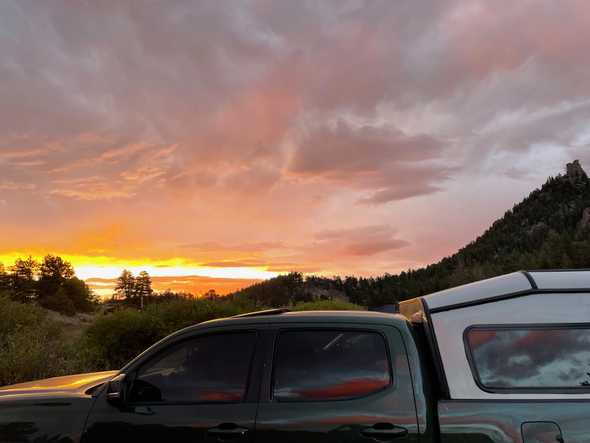 The half marathon started an hour after the 50k at about 7500 feet. This was the low point of the course. It would be all uphill (and downhill) from here for a total change of about 1800 feet.

The first two miles to the Elkhorn aid station consisted of a super smooth dirt road and the first few hundred feet of climbing. My plan going into the race was to take it easy, hike the climbs, run the flats and downs, have a good day, and DON'T BLOW UP.

I ran through the first aid station without stopping. At just 2 miles in and only 11 left there wasn't much of a point. I may not have hiked any of the inital climbs like I planned, but I was definitely taking it easy.

So far so good. 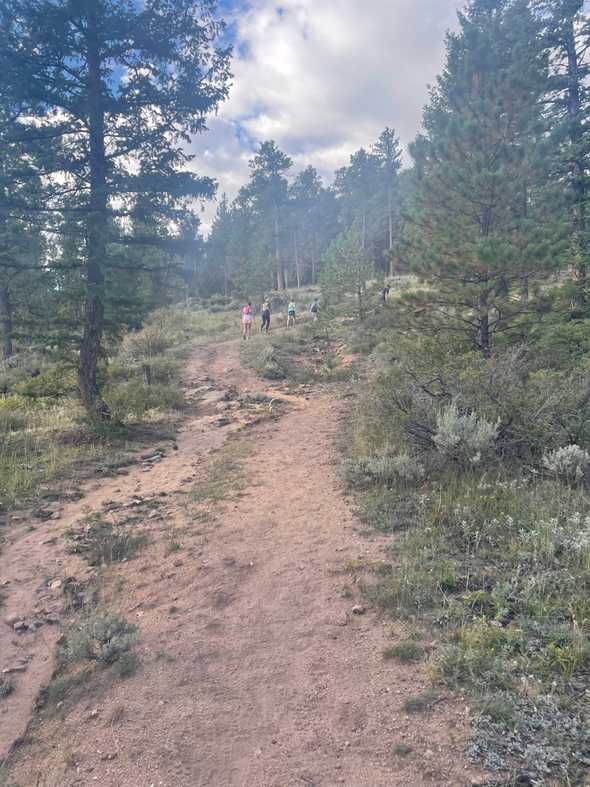 The next four to five miles contained the bulk of the elevation for the remainder of the race. I knew that if I could keep it under control until we made it over the hump I could push it on the back half. On the first hike I was passed by a few runners chewing up the climbs with a steady gait only to bomb past them on the downs. We played leapfrog for the next hour until about mile 7. 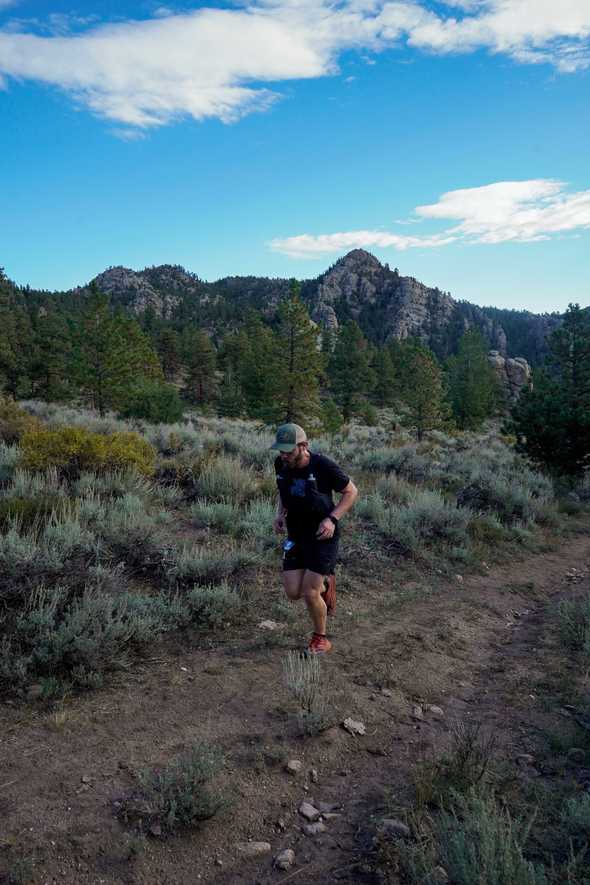 Topping out at about 8500 feet it was finally time to head back down. I said my goodbyes to some familar faces I had been trading places with and happily opened up my stride for some long awaited:w sustained downhill running.

The trail dropped about 500 feet over the next 2 miles to Lady Moon aid at mile 8.5. It was there that I tagged a gate, refilled my water bottles and turned around to execute the only out and back on the course. 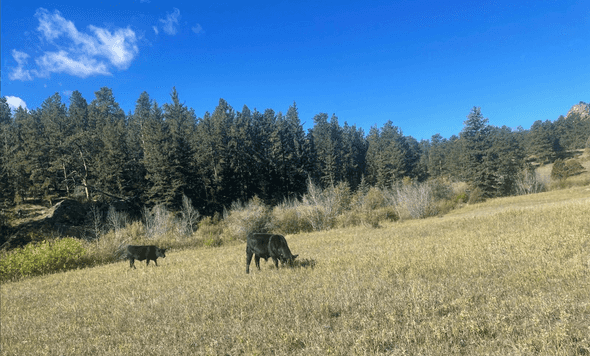 The next mile and half included yet another climb, nothing major but at this point I was really hoping to be done with climbing. Mile 11 was just what I was looking for! ~300 feet loss on smooth downhill single track! My first and only sub 8 minute mile of the day. I passed a few more folks here and settled in for what I thought would be a smooth cruise to the finish line at the bottom of a big hill.

After a mile or so of fast (for me) running Elkhorn aid came into view. With only a couple miles to go I again ran through the aid station without stopping. The shouts of encouragement from volunteers and spectators were very much appreciated!

I was looking forward to more downhill - this time on the flat dirt road we started on. Unfortunately I seem to have had forgotten that there were also climbs on that road. Again, nothing major but I was running low on steam and ended up doing yet more hiking.

The last turn to the finish line was finally in sight. I was looking forward to cheers, maybe some cowbells, anything to pull me that last little bit to the end. It was oddly quiet. When the trail did turn, there was no finish line, no cowbells, no cheers. Just more course markings.

They had moved the finish line to the mess hall! One last push up a few hundred feet of stairs... nothing to do but power through.

Finally, after 13.8 miles and a bit more elevation than advertised I made it across the finish line. I had decided beforehand that anything under 3 hours would feel like a success. With as much hiking as I did I really wasn't expecting to even crack 3 hours. But in the end I managed to cross the finish line in just over two and half good enough for 36th place overall.

I may not look it but I really couldn't be happier with the result. 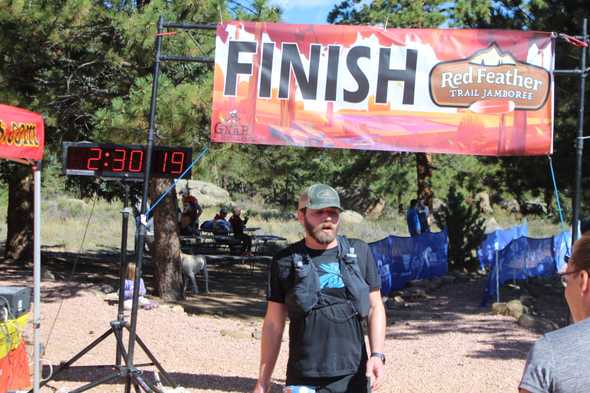 The Red Feather Jamboree was a fantastic event. It was very well organized, had perfect weather, and felt like a great intro to Colorado trail racing. Oh! and instead of yet another finishers amulet we got our pick from an array of specially bottled jams! I waffled between rhubarb, peach, and strawberry before deciding. 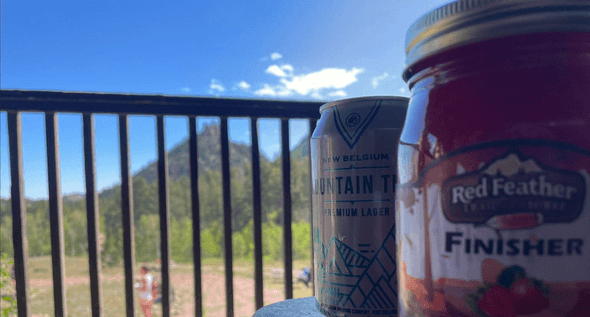